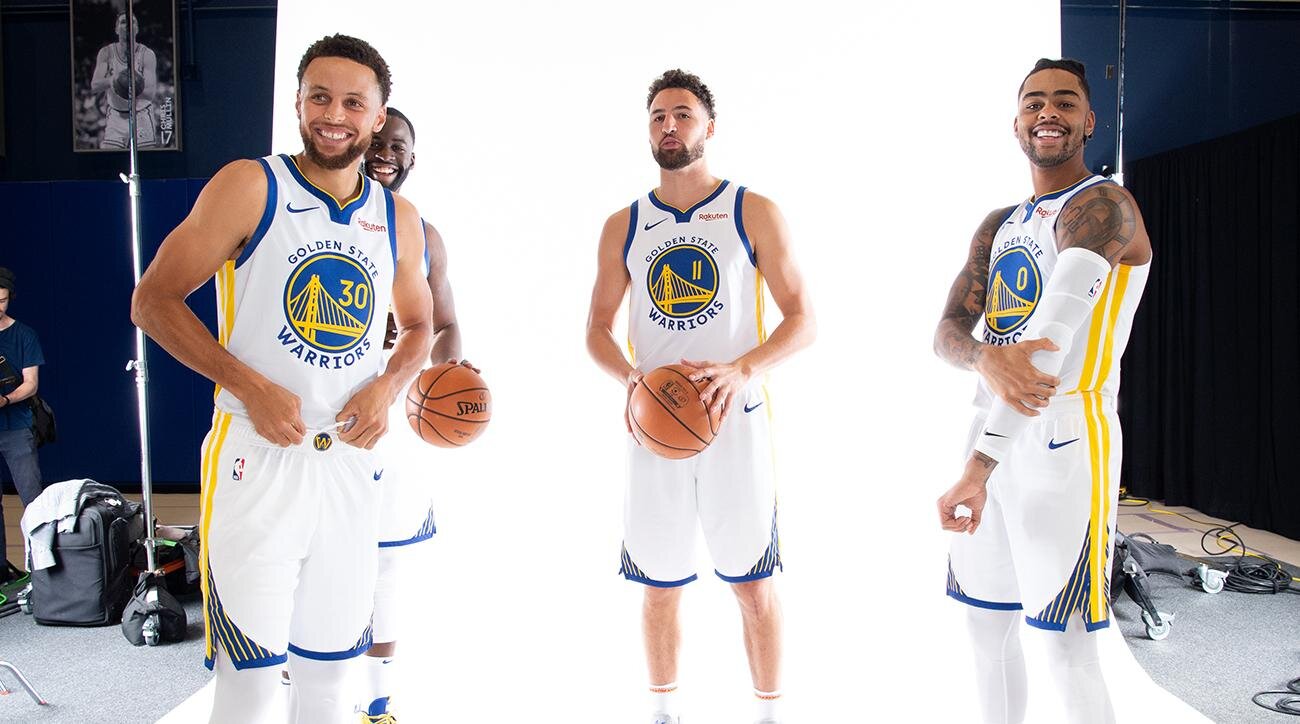 The Lakers and Clippers Need to Have More Fun

by Jeremy Woo
Podcast
Besides Zion Williamson, Who Should Be the Favorite for Rookie of the Year?
Zion Williamson is entering the NBA season as the favorite to win Rookie of the Year. But are there any other players that should be on our radar?
by Andrew Sharp and Ben Golliver
1:38
NBA
For LeBron’s Second Season, the Lakers Make A Lot More Sense
The Lakers’ circus is over after a year of dysfunction, clearing the way for LeBron James and Anthony Davis to chase a championship with a hand-picked supporting cast.
by Rohan Nadkarni
1:46
NBA
Five NBA Veterans In Need of A Home
With NBA training camp officially here, there are a few proven players without teams to call home. Here are a few players who should get picked up soon.
by Khadrice Rollins
NBA
Beyond Endorsing: How Veggie Burgers Became the NBA's New Gatorade
How do you sell veggie burgers as the new Gatorade—performance boosters that taste great? Beyond Meat's answer was to sign on stars like Chris Paul and Kyrie Irving as investors and "ambassadors." With the company booming, it's not only the food industry that's changing but also the NBA.
by Chris Ballard
2:00
NBA
Five NBA Teams That Should Tank In 2019-20
Tanking is by no means a guarantee a team will land the top overall pick in the NBA draft. But there are a couple teams that should punt this upcoming season and start planning for 2020-21 as soon as possible.
by Khadrice Rollins
2:16
NBA
The Case for the Bulls As a 2020 Playoff Team
If Lauri Markkanen, Zach LaVine and the Bulls crash the 2020 NBA playoffs, don't be surprised. The Crossover breaks down Chicago's postseason chances.
by Andrew Sharp
NBA
SI's NBA All-Decade Team: First Team
With the 2010s coming to a close, The Crossover takes a look back at the decade that was. Welcome to the All-Decade Team, which reflects on the last 10 years and the players who defined them.
by Rohan Nadkarni

The Technicality That Could Derail Zion's Lawsuit

Four Training Camp Storylines to Keep An Eye On

Silver's Tampering Clampdown Is A Positive Step If Enforced

SI TOP 100
NBA
Top 100 NBA Players of 2020
Who will be the NBA’s best players in the 2019-20 season? Sports Illustrated unveils its sixth annual Top 100 list. And for the first time in the list's history, there's a new No. 1.
by Rob Mahoney
masai's summer
1:40
NBA
Giants of Africa: Masai Ujiri's Summer of Going Back and Giving Back
How the Raptors' president spent his championship summer: leading a monthlong tour of his home continent with his foundation, teaching the game, absorbing the culture and serving as walking, talking proof to countless kids from Africa that even if they can't play ball they can still thrive in the NBA.
by Masai Ujiri (As told to Andrew Sharp)
Trending
NBA
Predicting NBA's Top Stars in 2020s
NBA
The Biggest NBA Stories of the Decade
NBA
Nine Sneakers That Defined the Past Decade

1:38
NBA
Is Jaylen Brown Worth a Max Extension? | Open Floor Podcast
Jaylen Brown has shown flashes of promise during his time in Boston but is he worth a max extension for the Celtics? The Open Floor crew discusses.
by Andrew Sharp and Ben Golliver
Podcast
How Much Pressure Is on Kyrie Irving This Season? | Crossover Podcast
How will Kyrie Irving fare in year one in Brooklyn? The Crossover podcast discuss his expectations, his leadership skills and more.
by Chris Mannix
Podcast
USA Basketball Needs To Build Around Zion Williamson
What does the future of USA Basketball look like? The Open Floor podcast discuss Team USA's future, Zion Williamson and LeBron James.
by Andrew Sharp and Ben Golliver
Podcast
What Does the Future Hold for Markelle Fultz? | Crossover Podcast
The interest in Markelle Fultz's jumpshot hasn't waned one bit. The conversation has cropped up once again, and Chris Mannix discusses Fultz and his future in the latest Crossover podcast.
by Chris Mannix

NBA
Summer Stock Watch: Where 2020 NBA Draft Prospects Stand
While the 2020 NBA Draft is still a year away, it's not too early to start tracking top prospects. The Crossover takes a look at Cole Anthony, Deni Avdija and more.
by Jeremy Woo
1:12
NBA
NBA Draft Dispatch: LaMelo Ball, Cade Cunningham and What’s Next
It's not too early to start thinking about the future. The Front Office on LaMelo Ball's rise as a prospect, an introduction to Cade Cunningham and why the 2021 draft will be stacked.
by Jeremy Woo
2:08
NBA
High School Basketball Phenom Emoni Bates Already Has the NBA Buzzing
He was recently anointed the best high school basketball prospect since LeBron James. He has been compared to Kevin Durant and Kobe Bryant. He also has a documentary tracking his every step. It won’t be long before Emoni Bates is a household name.
by Jeremy Woo
1:33
NBA
2020 NBA Draft Big Board: An Almost-Too-Early Ranking of Next Year's Class
The 2019 NBA draft is behind us, which means it's time to take a look into the future and rank potential players in next year's class. The Front Office provides insight on the futures of James Wiseman, LaMelo Ball and more.
by Jeremy Woo

1:43
NBA
Giannis, Jokic and a Guide to the 2020 NBA MVP Odds
The summer is behind us and a wild NBA season is in front of us. With that in mind, The Crossover provides notes on the 2020 contenders for the MVP.
by Andrew Sharp
NBA
How Red Panda Became the NBA's Favorite Halftime Performer
Rong Niu, better known as Red Panda, has become a mainstay at NBA halftime shows across the country. While she performs alone on the court, the long hours and hard training with her father, GuiZhang, prepared Niu for the spotlight.
by Jake Fischer
0:45
NBA
Dennis Rodman Needs A Hug
The actions that brought Dennis Rodman infamy during his career would probably be viewed somewhat differently in the 21st century. The Hall of Famer opened up to The Crossover about his ESPN 30 for 30, his relationship with Donald Trump and more.
by Rohan Nadkarni
NBA
How David Griffin Rebuilt the Pelicans and His World
After a miserable exit in Cleveland, David Griffin found a new home in New Orleans where he took on the task of rebuilding Gayle Benson's Pelicans during the Anthony Davis trade saga. With phenom Zion Williamson on board and a core of veterans hungry for a playoff push, the team down in the Bayou will be one of the most talked about in the NBA this upcoming season.
by Jake Fischer

NBA
Western Union: A Blue Chips Oral History
Shaq and Penny. Bobby Knight and Dickie V. The Sexiest Man Alive and the guy behind The Exorcist. Twenty-five years ago they all combined—or collided, really—to create the definitive college-hoops-scandal movie. This is the inside story.
by Tim Rohan
NBA
One Big Dream: Yao Ming Wants to Make Chinese Basketball Global
As his nation's first (and still only) NBA star, Yao Ming made basketball relevant in China. Now, as chairman of the CBA, he wants to make Chinese basketball relevant across the world and ensure that he's not the country's last export.
by Alex Prewitt
0:29
NBA
Kyle Lowry’s Improbable NBA Journey: From Mr. Stubborn to Mr. Raptor
He didn’t see eye-to-eye with his boss after a franchise-altering trade, but Raptors point guard Kyle Lowry kept his cool, cleared the air and four months later helped lead Toronto to its first NBA title.
by Chris Mannix
NBA
Why Rich Paul Will Own the NBA Summer
The most polarizing figure in the NBA is not any owner, player, exec or even LeBron James—it’s Rich Paul, the King’s agent and friend, who unleashed havoc on the league this past season when he demanded that New Orleans trade star client Anthony Davis in a seeming bid to unite him with James in L.A. Paul’s next moves could reshape the entire league, but here’s the thing: He and LeBron have bigger plans.
by S.L. Price

1:02
1:02NBA
What Would a Potential World Cup Loss Mean for Future of USA Basketball?
A number of the U.S.'s biggest stars are sitting out of the 2019 FIBA World Cup. But even if team fails to take home the title The Crossover's Rohan Nadkarni believes that the only way the program will get a wake up call is if America suffers an early exit.
0:57
0:57NBA
Donovan Mitchell Poised to Take Major Leap Following FIBA World Cup
Ahead of the 2019 FIBA World Cup, The Crossover's Rohan Nadkarni joins SI Now to discuss how Donovan Mitchell's big role on the current U.S. team puts him a position to take a major step forward in the NBA this season.
NBA
Brooklyn Nets: Could Melo Sign Following Chandler Suspension?
NBA
Shaq, Kobe Revisiting Lakers Championship Debates Yet Again
NBA
Joe Johnson's Possible NBA Helps Legitimize the Big3

WNBA
Dearica Hamby’s Winner Caps Off Thriller, Sparks Temper Storm as Semifinals Approach
Dearica Hamby hit a winner for the ages to set up an epic semifinals matchup with the Mystics while the Sparks showed just how good they can be in a rout of the Storm.
by Kellen Becoats
WNBA
Five Storylines to Watch During the Last Week of the WNBA Regular Season
The WNBA regular season is almost over. But before you switch completely into playoff mode, check out some of the most intriguing storylines surrounding the last week of the season.
by Kellen Becoats
WNBA
As the Storm Ready for the Playoffs, Coach Dan Hughes Reflects on His Fight with Cancer
As the Seattle Storm look ahead to the WNBA playoffs, head coach Dan Hughes reflects on his difficult—but inspiring— personal journey over the course of the season.
by Kellen Becoats
WNBA
Finding the Sky’s Limit: Just How Good Is Chicago as the Postseason Approaches?
With so many storylines swirling around the WNBA, the Sky don't seem to be on some people's radars. But Chicago—and its MVP candidate—is showing just how good it can be as the postseason approaches.
by Kellen Becoats