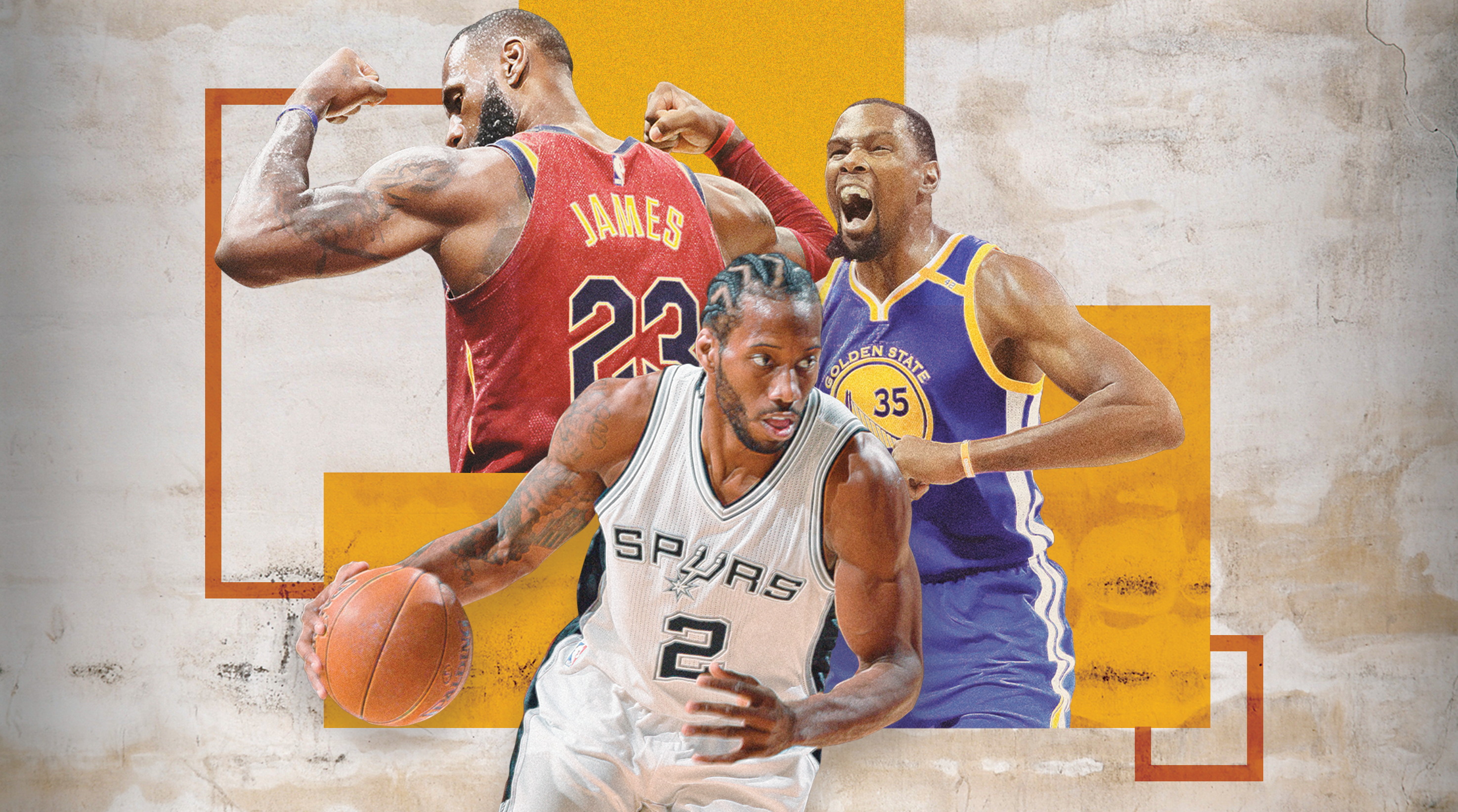 With the 2010s coming to a close, The Crossover takes a look back at the decade that was. Welcome to the All-Decade Team, which reflects on the last 10 years and the players who defined them.
By Rohan Nadkarni
Reddit Flipboard WhatsApp Email Copy Link Print

The conclusion of this upcoming NBA season will take us into a new decade, filled with hope, wonder, and excitement (but apparently no ninja turtle-style headbands??) With the 2010s rapidly approaching their end, Sports Illustrated decided there would be no time like the present to look back on the decade that was. So welcome to All-Decade Week, a look back at some of the players (among many other things) that made the last 10 years of basketball some of the best we’ve ever seen. Today we present the final installment of the series, focusing in on the best of the best from the decade.

It’s hard to think of players over the last decade who demoralized opponents as much as Stephen Curry. He was never the most physically imposing superstar. Many of his contributions to the Warriors’ enduring success remain subtle. But something he excelled at arguably more than anyone else on this list was leaving opponents completely, utterly, almost sadly helpless. Curry is the greatest shooter of all time. No matter what defensive schemes were thrown at him, he would find a way to create an inch of space, immediately launch a shot, and splash a three while tired defenders awaited the roar of the crowd.

Curry is simply one of the most unique talents in NBA history. He took the skill most integral to the game—shooting—and mastered it in a way no one before him has. Who else in their right mind would have the confidence to attempt a game winner from nearly halfcourt against a bitter rival, like Curry did in that wildly entertaining overtime game between the Thunder and Warriors? That was Curry at his best, showcasing not only his unbelievable skill, but his moxy, and his underlying desire to humiliate. Don’t be fooled by Curry’s boyish looks or his willingness to set screens—he always was and always will be a killer.

Steph changed the game. He bent defenses completely out of shape. His mere presence on the court—he could be 20 feet away from the basketball!—basically ensures a juggernaut offense. Curry was the tip of the spear for one of the greatest teams ever. First-Team All-Decade only scratches the surface on the mark he’s left on the game.

Look at Harden’s peers on this list of First-Teamers, and then consider how at times, Harden is seemingly more unstoppable than the rest of them on offense. There are legitimate discussions to be had about the aesthetic quality of Harden’s game, and whether or not his style of play is appealing to purists. There is absolutely no argument to be made about Harden’s production, however. He is a bucket-getter in a league of his own, and he’s basically been on a massive scoring binge over the last seven seasons.

Harden has averaged at least 29 points per game for the last four years, including 30.4 in 2018 and an absurd 36.1 in 2019. How the hell do you stop this guy? He’ll lull you to sleep in an iso before stepping back and draining a three in your face. If you dare not pressure him on a high screen and roll, he’ll gladly take the space and let it fly from the outside. If you pressure him too much, he’s a willing passer adept at finding his bigs through lobs or his shooters on the wing. More than anyone else on the first team, Harden has seemingly hacked the game of basketball. That style of attack has earned Harden his fair share of detractors, but it’s also made him wildly successful. He probably should have won at least one more MVP. And the conversation about his lack of playoff accomplishments doesn’t always take into account his underdog status.

Harden still has time to add hardware to his collection. He’s going to score a hell of a lot more points along the way.

If there’s a controversial selection for the First Team, it’s Kawhi. For the first four years of his career (which began in 2011), he was a role player on a great team, playing outstanding defense while not carrying a huge offensive burden. By 2015, Kawhi became San Antonio’s go-to guy, and the next season, he put up an MVP-caliber year. But Leonard essentially sat out the 2018 season, before returning with Toronto the following year, load managing his way up to a heroic playoff run that culminated in his second title and second Finals MVP. In some ways, the Kawhi experience has been a little boom or bust, but the highs have been so high, excluding him from the first team wouldn’t have felt right.

Leonard has gone toe to toe with every other player on this team in the playoffs, and he has wins against all of them. He unceremoniously ended LeBron’s time with the Heat, and then prevented a Warriors three-peat during his lone season with the Raptors. Kawhi’s two-way brilliance is suffocating for opponents. He practically willed himself into something like an efficient imitation of Kobe on offense, and he remains the ultimate trump card on the defensive end, someone who can match up with and credibly slow down any player in the league—including all his contemporaries on this All-Decade Team.

While Leonard may not have had the sustained brilliance as the other players on this team, his success both as a whole as well as against his peers is impossible to ignore. It’s possible, maybe even likely, that the best of Kawhi is yet to come. As he’s shown when healthy and fully engaged, there’s no challenge he hasn’t been able to meet.

Will Kevin Durant ever be properly appreciated? I’ll always argue the reason people really didn’t like his decision to join the Warriors is because he was already too good, already on his way to immense success—he didn’t need to stack the odds so heavily in his favor. However Durant was judged in the aftermath of joining Golden State—one of the most important moments in NBA history—at no point was there ever a question about what he could do on the floor.

If Curry is the best shooter ever, Durant is arguably the best scorer ever. Everything he does feels so effortless. He can rise up above any defender in the league, from anywhere on the floor, and get what he wants. If there’s any hint of downside to Durant’s career, it’s that we’ve never seen him have an opportunity to be fully selfish. How many points per game would an in-his-prime Durant have scored if he wasn’t playing with point guards who also command shots? It feels like the only thing stopping Durant from getting 38 a night was because he didn’t have the opportunity to.

Durant is just ice cold. He hasn’t shot under 50% from the field in a season since 2012, when he shot 49.6%. He’s almost a 50-40-90 guy for his career. He’s never, ever shown fear in a high-pressure moment. And he’s a hell of a defender for good measure. KD’s legacy may be complicated at the moment. His game is not. His skill is unassailable. And it’s possible we’ve yet to see him completely unleashed.

LeBron’s last decade feels like multiple lifetimes. From 2011–2013 especially, James was on a different astral plane than every other player in the NBA. He was toying with basketball. Remember when he tried to score 30 points a night on 60% shooting just because he needed something to do during the regular season? Remember when he closed out Kevin Durant and Russell Westbrook with a triple double to win his first Finals? Remember when he saved the Heat and the Big Three with his monumental Game 6 on the road in Boston? Or how about his Finals-clinching shot in Game 7 of an epic series against the Spurs?

Oh, and we haven’t even talked about perhaps the most breathtaking athletic play of the millennium—The Block, a superhuman display of effort and determination that helped complete the greatest, most improbable, larger-than-life-or-theater Finals comeback of all time.

There is just no way to distill LeBron’s greatness in one play, one series, or a few paragraphs. The guy made eight straight Finals! Whether you loved or hated LeBron, he provided you with incredible moment after incredible moment. He gave you something to talk about. He made you feel passionately about him one way or another. And any adversity in his career only made his highlights stand out that much more. We’re really all just lucky to have been alive at the same time as LeBron James.