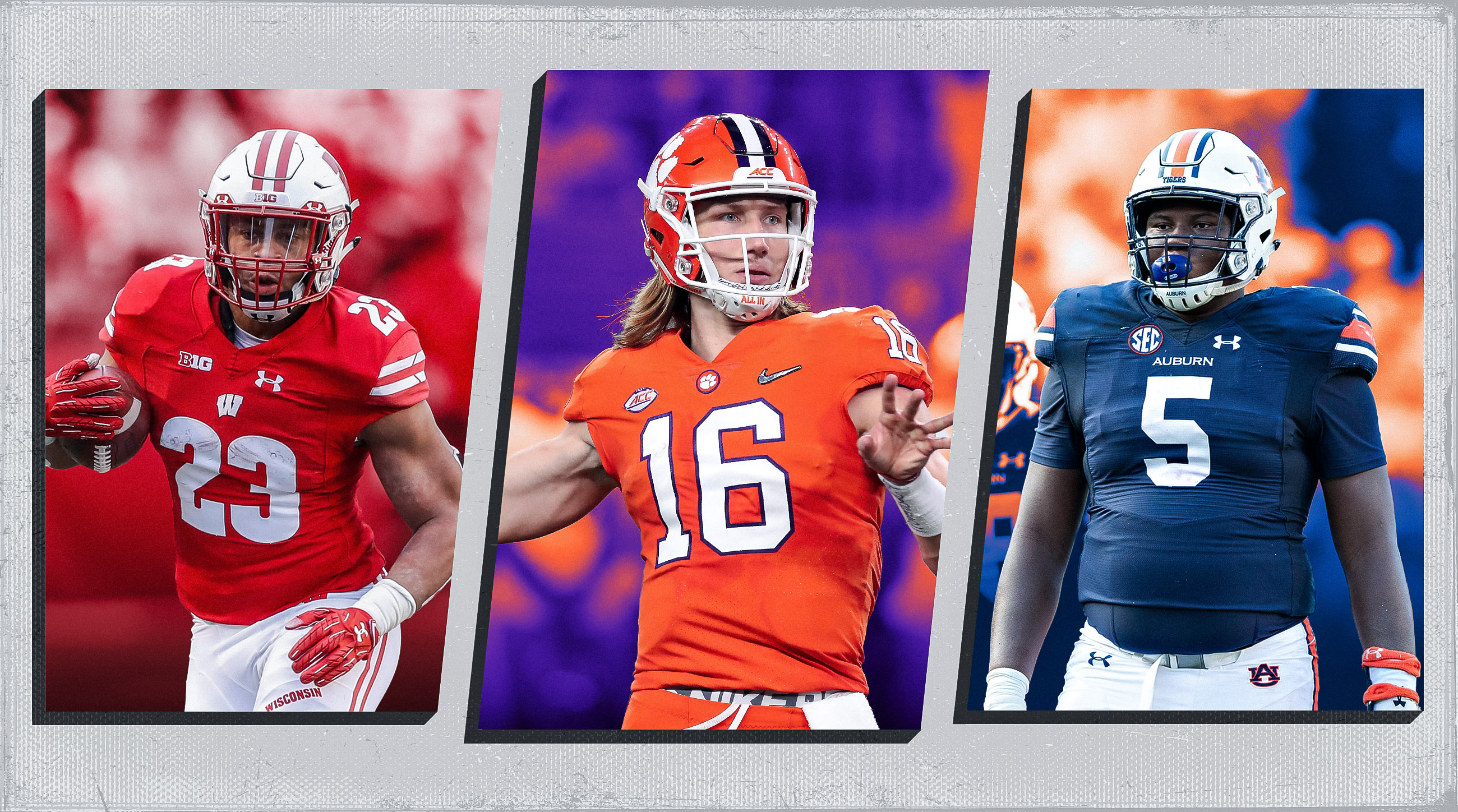 Who will be the top players at every position in college football this fall? The votes are in for our first- and second-team All America.
By The SI Staff
Reddit Flipboard WhatsApp Email Copy Link Print

As the new college football season approaches, our writers and editors cast ballots projecting the fall’s biggest stars to construct SI’s 2019 All-America teams. While there's a clear upper tier among the main offensive skill positions this year, which is largely dominated by last year's title-game participants, Clemson and Alabama, many of the names at other positions were far from easy calls. With just one week until Week 0 gets underway in Orlando, the results are in.

An asterisk (*) next to a player's name indicates that he was a unanimous selection.

Lawrence took the top spot over fellow QB Tua Tagovailoa in SI's summer ranking of the top 100 players of the 2019 college football season, and he got the nod over his Alabama counterpart here as well (it wasn't, however, unanimous). As a true freshman who usurped proven starter Kelly Bryant just weeks into the 2018 season, Lawrence threw for 3,280 yards, 30 touchdowns and just four interceptions. He also completed 65.2% of his passes and averaged 8.3 yards per completion.

The Badgers' running back has torched opposing defenses for two seasons now, and he somehow improved on his superb freshman season as a sophomore in 2018. The 5'11" Taylor crossed the 2,000-yard threshold, running for 2,194 and 16 touchdowns and averaging 7.1 yards per attempt, even as Wisconsin's season didn't go as well as planned. He had five games of 200 or more yards last fall, including gashing Purdue for 321 on 33 carries.

Around the same time that Lawrence took over for Bryant in leading the Clemson offense, Etienne broke out for the Tigers en route to a 1,658-yard, 24-touchdown sophomore season. He had nine touchdowns in a three-game span in late September to mid-October, and ran for a combined 195 yards and tallied four scores in the College Football Playoff to help Clemson capture the title.

Ranked as one of our top-five 2019 players in all of college football, Jeudy was a slam-dunk for unanimous first-team selection. The latest in a long line of elite Alabama wideouts, Jeudy emerged as the Tide's top receiving threat last fall, catching 14 touchdowns and totaling 1,315 yards on the season across 68 receptions. With Tagovailoa back in Tuscaloosa as well, expect big numbers again from Jeudy in 2019.

One of the better stories of the 2018 college football season, Shenault burst into the spotlight last fall behind an impressive first half of the season before being slowed by injury. He scored in each of the Buffaloes' first five games and crossed the 100-yard mark five different times, including a season-opening 211-yard performance against Colorado State.

Injury cut Okwuegbunam's 2018 season short after nine games, but he still hauled in six scores and 466 yards on 43 catches for Missouri (this coming after an 11-touchdown freshman year). Oozing with potential at tight end, Okwuegbunam should have a big year for the Tigers and new QB Kelly Bryant if he can stay healthy.

Thomas, who has started at both tackle spots for Georgia, put himself firmly on NFL scouts' radars with his performance on the left side last fall, and he'll enter 2019 with plenty of buzz as he leads the Bulldogs' offensive line in protecting star QB Jake Fromm.

The return of Lemieux, who is Pro Football Focus's highest-graded active guard and finished 2018 at No. 6 nationally, gave Oregon its entire starting offensive line back for 2019. With two Ducks on our second team at OT (see below), things look bright for QB Justin Herbert.

An experienced lineman who has started 33 career games for the Wolverines, Bredeson anchors a veteran OL in Ann Arbor that will look to open things up for Shea Patterson and the offense.

While these things always have an air of subjectivity, there's little doubt that Biadasz enters 2019 as the widely-regarded best center in the country. And with the rest of the Badgers' offensive line being much more of an unknown, Wisconsin will be counting on him even more this fall.

Young became pivotal to the Buckeyes after star DE Nick Bosa's season ended in mid-October, and he delivered with a stellar breakout season that portends more good things in 2019. The 6'5" pass rusher logged 10.5 sacks and 34 tackles (25 solo), and according to PFF he had a whopping 75 quarterback pressures.

Despite not starting and lining up for only 48% of the Hawkeyes' defensive snaps as a sophomore in 2018, Epenesa totaled 10.5 sacks and 37 tackles (21 solo) for the Iowa defense. He'll step into a bigger role this fall.

Brown, who was PFF's highest-graded interior defensive lineman over the past two seasons, was the only defensive player to crack the top five in SI's top 100 ranking for 2019. The 6'5", 318-pound DT recorded 4.5 sacks and 25 solo tackles for Auburn last year and will headline the Tigers' formidable front seven this fall.

Davis, who stands at a monster 6'7", probably wasn't expected to be back for a senior season after collecting 8.5 sacks in his sophomore year in 2017. And while his production dipped in 2018—only 1.5 sacks, though he matched 2017 with 24 solo tackles—expect a big year in his last ride in Tuscaloosa.

Moses led the Crimson Tide defense with 86 tackles last fall—10 of which were for a loss—and added 3.5 sacks and a forced fumble. He tied his season-high with five solo tackles in the SEC championship win over Georgia.

A former safety who moved to linebacker in 2018, the athletic Simmons (who has also done long jump for the Clemson track & field team) didn't disappoint for the national champs. He paced the team with 89 total tackles, forced three fumbles and grabbed an interception, which he turned into a pick-six.

Fisher had a big sophomore year for the Wildcats, totaling 116 tackles (63 solo), forcing four fumbles and adding one pick in 2018. He closed the season especially strong, recording at least 11 tackles in three of Northwestern's last four games, including 13 in the Holiday Bowl vs. Utah. Look for him to pick up where he left off.

In two seasons with the Gators, Henderson has made six interceptions, and as a sophomore in 2018 he had 26 solo tackles, three sacks and two forced fumbles. He had seven solo tackles alone (including two for loss) in Florida's Peach Bowl win over Michigan.

The anchor of what should be another fearsome LSU secondary, Delpit had five interceptions, made 74 tackles (46 solo) and added five sacks as a sophomore last fall. According to PFF, he also didn’t allow a reception longer than 32 yards.

The Longhorns are replacing eight starters on defense in 2019, but Sterns is not one of them. The 6'1" safety had a big year as a true freshman, leading Texas's defense with four interceptions and logging 62 tackles (46 solo).

As a redshirt freshman in 2018, Szmyt won the Lou Groza Award for the nation's best kicker after making 30 of 34 attempts with a long of 54 yards, going a perfect 61 for 61 on extra points and making all three of his tries from 50+ yards out.

Back for his senior year, Mann used his big leg to average an FBS season record 51 yards per punt in 2018 and win the Ray Guy Award as the nation's best punter. His 14 punts of 60 or more yards also set an NCAA single-season record, making him a true game-changer for the Aggies.

Were it not for Trevor Lawrence, Moore would've been the breakout true freshman in college football in 2018, but what he did was still quite special. After becoming the first four-star recruit to pick Purdue since 2013, Moore shredded opponents to the tune of 1,258 receiving yards, 744 return yards and another 213 rushing, finishing with a total of 14 touchdowns. His spotlight moment came when he totaled 252 yards against Ohio State in the Boilermakers' signature upset, and he's probably got many more to come.

Named the 2018 AAC Special Teams Player of the Year, Wright, who doubles as a receiver for the Owls, returned three punts/kicks for touchdowns as a junior and averaged 25.7 yards on kickoff returns. He combined for 1,122 return yards on the season.