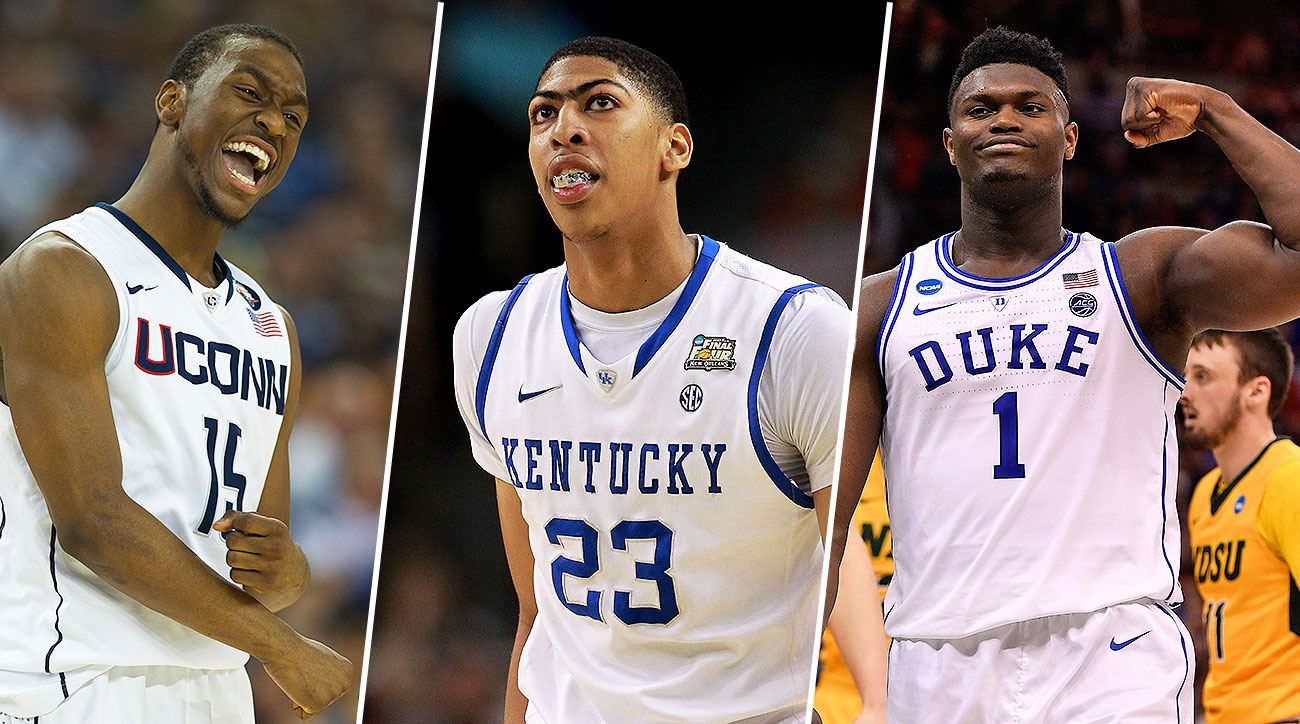 These five players shined the brightest in college hoops over the last 10 seasons and left an indelible mark on the sport.
By The SI Staff
Reddit Flipboard WhatsApp Email Copy Link Print

Welcome back to SI's college basketball All-Decade package, wrapping the best of the best from the 2010s. All week long, we're looking back on the last 10 years in college hoops and the players and teams that shaped them. There are countless players who left their mark on the sport, whether for a season, career, or fleeting March moment, but only the best of the best can earn a spot on our All-Decade teams, voted on by a panel of SI writers. Earlier this week, we revealed SI's men's college basketball All-Decade third and second teams. Next up, we present the First Team—the five best careers in college basketball since 2009–10.

Anthony Davis only logged 40 games with the Wildcats, but the 2012 Wooden Award winner certainly dominated enough in one season to warrant a spot on our All-Decade first team. Davis completed the college basketball triple crown as a freshman, winning the championship and earning NCAA tournament Most Outstanding Player in addition to the Wooden and Naismith honors. He turned in perhaps the greatest single-season performance this decade.

No interior defender shaped the game quite like Davis in the 2010s. His 186 blocks as a freshman are the most of any player since 2010, and the most of any major conference player since block data became available in 1992. Davis blocked five-plus shots in 20 of 40 games. He had double-digit rebounds in 23 contests. No game illustrates Davis’s dominance quite like the 2012 national championship, a 67–59 Wildcats win over Kansas. Davis shot just 1 of 10 from the floor, but he was still the matchup’s most impactful force. He hauled in 16 rebounds and blocked six shots, adding three steals and five assists. The Jayhawks shot just 33% from two in the loss, at first denied at the rim, then deterred from even driving into the lane in the second half.

Davis was the ultimate rim protector at Kentucky, flashing the elite physical traits desired of the NBA’s No. 1 pick. Its no wonder why Davis was a consensus All-American in his lone season in Lexington. —Michael Shapiro

Perhaps no college player in the modern era has made it more readily obvious that the viewer is witnessing something on a given night than Williamson, who arrived at Duke as a curious phenomenon and left as arguably the best freshman in the history of the sport. His statistical case was prolific, and he won every award possible along the way, but with Zion, it was always more about the way watching him operate made you feel. He was capable of making a play at any moment, always dominating the margins of the game without hijacking the offense, turning rebounds and blocks into transition opportunities—a state in which he was mostly unstoppable. Williamson was blessed with unusual strength and athleticism, but also with a nonstop competitive streak, an unselfish approach and a contagious understanding that basketball should be fun.

In a historical context, the bar is understandably high for one-and-done players to leave a mark, and in most cases, anything short of a championship pales when comparing résumés. Williamson’s Duke team fell short, but like the aesthetics of his game, imperfect yet irrepressible, he demands an exception to the rule. His was an unforgettable season, defined by each major moment—myriad dunks, anti-gravity blocks, exploding sneakers—and the understanding that his time in college hoops was always going to be fleeting. Williamson left quite the exclamation point on this decade, one underscored by the prospect he might go on to dominate the next one. —Jeremy Woo

The arc of Buddy Hield’s college career was something to behold. The Oklahoma guard, who grew up in the Bahamas before attending prep school in Kansas, was a three-star recruit when he arrived in Norman in 2012. A solid contributor as a freshman, his sophomore year was when he truly started to assert himself, more than doubling his scoring production and becoming a more efficient shooter both inside and beyond the arc. He had a similar output as a junior, helping lead the Sooners to 24 wins and their first Sweet 16 in six years, and was named Big 12 Player of the Year. He then faced a decision: leave for the NBA draft, where he was getting potential first-round buzz, or return for one last ride in college?

Hield bet on himself and chose Oklahoma, citing “unfinished business” and his desire to play in the Final Four. He proceeded to put together one of the finest individual seasons of the decade, defying the usual convention that it’s tough for players to improve significantly from junior to senior year. After working on his perimeter shooting he smashed his previous highest three-point percentage of 38.6%, canning 45.7% of his threes despite attempting nearly nine per game. He averaged a blistering 25 points, showing off new ways to get around defenses that were increasingly keying in on him, and also posted career-highs in two-point percentage, free throw shooting and rebounding.

And when the spotlight shined the brightest, Hield raised his game even more. He famously scored 46 points in a triple-overtime January loss to No. 1 Kansas in Allen Fieldhouse, giving such an effort that he received an ovation from Jayhawks fans afterward. And when March came, he averaged 29 points in four NCAA tournament wins that got Oklahoma to the Final Four he had dreamed off, including dropping 37 in an Elite Eight win over Oregon. In the end, he won the Wooden and Naismith awards and went on to be drafted sixth overall in the NBA, proving that it's never too late to make your best impression. —Molly Geary

I remember like it was yesterday. It was the 2010–11 Big East tournament, and Kemba Walker had the ball in his hands as UConn and Pittsburgh were knotted up at 74 apiece. Roughly 10 seconds remained on the clock when Walker caught Panthers big man Gary McGhee on a switch at the top of the key. He sized McGhee up, crossed over to get the big man leaning, dribbled a little to his left, then stepped back—which made McGhee fall—and knocked down the game-winning jumper as time expired. It was one of the wildest buzzer beaters I’ve seen on the college level with my own two eyes. Still to this day.

That shot helped set the stage for what wound up being one of the most incredible tournament runs in NCAA history. Walker was in a groove. After dropping four of five games leading up to the conference tourney, Walker got hot and carried the Huskies to 11 straight elimination game wins and their third-ever national title. That season, which was his junior year, Walker averaged 23.5 points, 5.4 rebounds and 4.5 assists per game, and was named the Big East tournament MVP and NCAA Final Four Most Outstanding Player. He was simply remarkable, and it boosted his NBA stock as he was drafted with the ninth overall pick by the Charlotte Hornets in 2011. —Josiah Turner

While Davis was a supernova streaking through NCAA, McDermott was a steady star for college basketball from 2010–14. Creighton’s sharpshooting forward logged four seasons playing for his father, Greg McDermott, and each of the final three years resulted in a Blue Jays’ tournament appearance. McDermott couldn’t carry Creighton to the Sweet 16 in three chances, but his consistent excellence lands him on our All-Decade first team.

Not only did McDermott have the most points of any player in the three-season stretch from 2011–14, he absolutely lapped the competition. McDermott (or, if you’d rather, McBuckets) poured in 2,569 points from 2011–14, nearly 600 more than second-place finisher Travis Bader. The scoring prowess earned McDermott three-straight consensus All-American honors and two Missouri Valley Player of the Year honors. The current Pacers’ forward made 274 threes in four seasons with Creighton, canning an absurd 45.8% mark from beyond the arc. McDermott was a walking bucket at the collegiate level. He stands above the field as the best mid-major player this decade. —Michael Shapiro