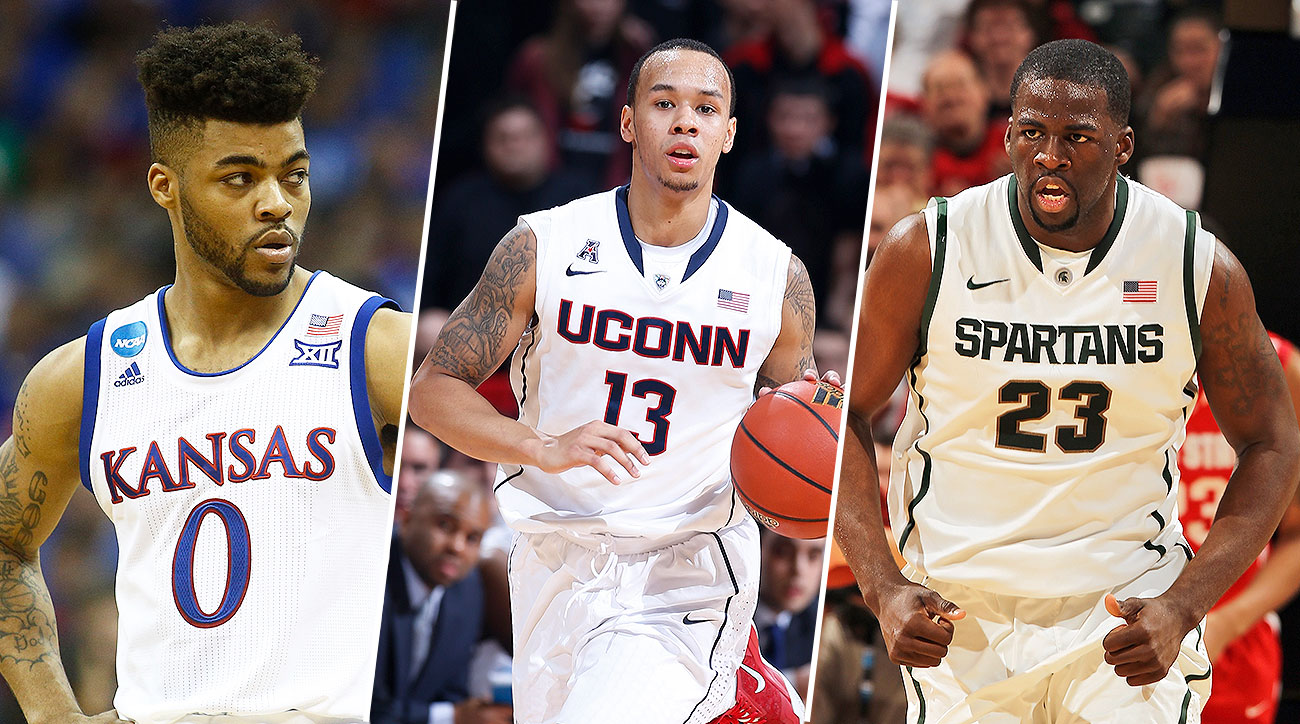 With the 2010s coming to a close, SI takes a look back at the decade that was in college basketball. Welcome to the All-Decade Team, which reflects on the last 10 years and the players who defined them.
By The SI Staff
Reddit Flipboard WhatsApp Email Copy Link Print

Welcome to SI's college basketball All-Decade package, wrapping the best of the best from the 2010s. All week long, we'll be looking back on the last 10 years in college hoops and the players and teams that shaped them. There are countless players who left their mark on the sport, whether for a season, career, or fleeting March moment, but only the best of the best can earn a spot on our All-Decade teams, voted on by a panel of SI writers. First up, we present SI's men's college basketball Third Team, made up of a two-time NCAA champion, two Spartans, a Jayhawk and a mid-major standout.

There are a scant few players in the past decade who left their fingerprints on multiple national championships. Shabazz Napier is on the shortlist. He played a key role as a true freshman in support of Kemba Walker during UConn’s historic 2011 run, then took center stage three years later, leading a seven-seed all the way to a stunning title and winning Final Four Most Outstanding Player in the process. Like Walker before him, Napier’s shot-making chops and embrace of big moments ignited a memorable late-season run, with the Huskies winning 11 of their final 13 games and toppling a series of difficult opponents—Villanova, Iowa State, Michigan State, Florida, and finally, Kentucky, along the way. His play in that stretch was sensational, elevating a streaky supporting cast with timely playmaking and hard-nosed performances.

Few college players can legitimately claim credit for having carried a team to a title, and in that stretch, there was no stopping him. You still wonder what could have been had UConn not served a postseason ban the previous year due to low team APR scores; credit Napier and his teammates for sticking around to close the deal. There have been plenty of great college guards, many with strong cases for this list, many arguably more talented and physically gifted. Napier’s postseason exploits and penchant for big plays more than earns him a nod. —Jeremy Woo

While the likes of Anthony Davis and Zion Williamson rocketed through the NCAA in one collegiate season, Frank Mason’s NCAA career was more of a slow burn. The 5’11” guard averaged just 5.5 points per game as a freshman in 2013–14, demurring to future lottery selections Andrew Wiggins and Joel Embiid. Mason was the Naismith Award winner three years later, dominating the Big 12 to the tune of 20.9 points per game. He left Lawrence in 2017 as one of the most accomplished players in Kansas history.

Mason garnered All-Big 12 selections in 2014–15 and 2015–16, averaging 12.7 points and 4.3 assists per game as a sophomore and junior. His senior season vaulted him to an All-Decade spot. Mason torched the Big 12 with 20.9 points per game, saving his best moments for the biggest stage. He scored 21 to beat Duke in November 2016. He poured in 27 points and nine assists in a road win over Oklahoma State on March 4. Mason’s NCAA tournament run was additionally impressive, with a 22.3-point and six-assist average before an Elite Eight loss to Oregon. Mason rose to the occasion and became Kansas’s premier player as a senior after a productive start to his career. He’s among the best players of the Bill Self era. —Michael Shapiro

The most impressive thing about Draymond throughout his college tenure, in my opinion, was the fact that he always flew under the radar by just doing the little things. And doing them well. He was a four-year player at Michigan State learning under the tutelage of Tom Izzo. He embodied everything that Izzo wanted in a Spartan. He was gritty, had a defensive mindset and cared about winning, and winning only. Sound familiar? That’s because he’s that same player today for the Golden State Warriors.

Green wasn’t a full-time starter at Michigan State until his junior year. As a senior, he racked up on all types of accolades and awards. He was named the Big Ten Player of the Year, was a consensus first-team All-American, was first-team All-Big Ten, was named to the Big Ten All-Defensive team and led the Spartans to a Big Ten tournament title, where he was named MVP. Many of the do-anything-to-win traits that Draymond inherited while in college has carried over to the NBA. The toughness and high basketball IQ that we see on the pro level, was birthed during his time playing under Izzo at Michigan State. —Josiah Turner

What couldn’t Valentine do at Michigan State? As a senior in 2015–16, the 6’ 5” hometown hero—and son of former Spartan forward Carlton—scored (19.2 points per game), shot from range (44.4% from three that season), dished (7.8 assists per game, at the country’s second-highest per-possession rate), rebounded (7.5 boards per game), and forced TOs (1.0 steals). And he did all that the season after being perhaps the best player on a Michigan State team that reached the Final Four through the arduous path of a No. 7 seed. As his coach, Tom Izzo, said after Valentine’s college career ended surprisingly early via first-round upset: “I may be in it a long time and never have another Denzel.” —Dan Greene

VanVleet’s résumé isn’t rife with counting stats and individual accolades, but his place at the helm and at the heart of four memorable Wichita State teams that helped shift the paradigm for mid-major programs carries a great deal of weight. The Shockers went 121–24 over four years, in which he never missed a game. They made the Sweet 16 three times, the Final Four once and nearly ran off an undefeated 2013–14 season that ended in the narrowest of losses to Kentucky. It was a memorable era defined by VanVleet’s unselfish playmaking, consistent perimeter shooting and tone-setting defense as a constant.

Van Vleet was frequently at his best when it mattered, from the dagger he hit as a true freshman to help down No. 1 Gonzaga in the second round, to outplaying Ohio State’s Aaron Craft two games later to help clinch a Final Four berth. Over the following three years as a full-time starter, his assist to turnover ratio was 3.4, he averaged nearly two steals per game, and he emerged as one of the less-heralded, yet most effective players in college hoops. There’s nothing overly flashy on the résumé here, but it’s tough to argue with VanVleet’s body of work, the quality of his play and Wichita State’s place as one of the most successful programs of the era. —Jeremy Woo